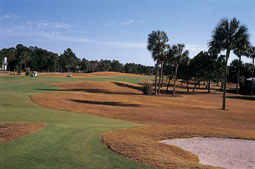 Bermudagrass fairways and rough can commonly found on courses in the southern part of the United States. A few courses in the Mid-Atlantic region are also starting to use the grass variety as a desireable fairway grass. Bermudagrass makes a great playing surface and thrives here along the coast, especially during the summer months. In this region however, bermudagrass only maintains its green color from late May through late October. Bermudagrass is a warm season grass that when temperatures drop below 60 degrees F and the days become shorter, this type of grass naturally goes into its dormant state. A loss of green color coincides with this period of dormancy and the top foliage turns straw to tan/brown until late spring when temperature rise again.
During this period of dormancy it is a common practice of most southern courses to overseed. The tees and fairways of the Man O War course are overseeded with a cool season turf called perennial ryegrass in the fall. Aesthetically, this produces a nice green playing surface and breath-taking contrast to the dormant bermudagrass during the winter and early spring months of the year.