OCEAN CITY — An afternoon on the links in Ocean City or the Delaware beaches in itself is a unique experience. The combination of scenic landscapes and challenging holes makes for a golf outing a beginner or a professional can enjoy.

Last month, Sports Illustrated and Golf.com took notice. The publication ranked The Links at Lighthouse Sound in Bishopville the 82nd-best public golf course in the United States. Bayside Resort Golf Club in Selbyville and Bear Trap Dunes in Ocean View were heralded among the best courses in Delaware.

“They’re all very playable for people of all levels,” said Bob Affelder, director of the Original Golf School in Ocean City. “They’re challenging and scenic. That’s what makes them fun to play.”
An instructor for more than half a century, Affelder has made an afternoon out of the course at Lighthouse Sound on plenty of occasions. 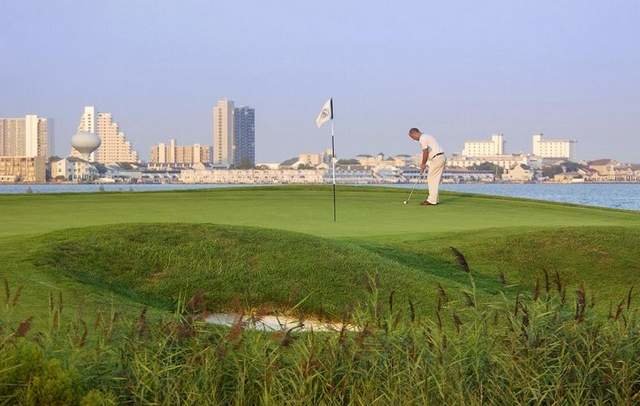 He credits the natural landscape — how some of the holes run along the water and back up into the woods — for both the elegant look of the course and its level of difficulty.

“It’s one of the best ones down here,” Affelder said. “Being a links, it’s right on the water, so you’re susceptible to water. There are calm days when it’s easier, and when the wind kicks up it’s more challenging.”

Lighthouse Sound was designed in 2000 by Arthur Hills. The Assawoman Bay and the Ocean City skyline serve as a backdrop to the 1,000-acre course.
Staples of the course include the 622-yard par-5 seventh, better known as “Devil’s Elbow,” as well as the 55-8 yard par-5 12th, which is named “River’s Edge” because it wraps around St. Martin’s River.

But what Lighthouse Sound has become renowned for is its signature cart bridge, vice president Kim Ruark said,. The cart bridge, which connects the front and back nine over marshlands and water, is the largest in the U.S.

“It’s really different than anything you have seen anywhere,” Ruark said. “There is a lot of property that consists of marshland that is very scenic.”

Lighthouse Sound made an annual appearance on the Top 100 rankings for most of the past decade. But in 2010, the course dropped out due to some conditioning issues.

Ruark said there were changes made, though nothing major. It came down to some bunker renovations and improvements to the greens.

“We take a lot of pride in having the greens roll really fast,” she said. “We just put a lot of effort into maintenance of the grass and everything around the clubhouse.”

The Links and the Bayside Resort Golf Club are distinguished among local golf courses because of their natural surroundings.

Aside from an opportunity for a beautiful photograph, the location — close proximity to the water and a naturally occurring angulation — can make for either a smooth round of golf or a more difficult test of skills.

“What makes them interesting is the different conditions you can get,” Affelder said. “You can score really well if you’re hitting the ball nicely. If the weather kicks up, it’ll bring out your shot-making skills. You have to control the flight of your golf ball. You have to keep it down in the wind. It makes for a challenging course.”

The course at Bayside was designed by Jack Nicklaus; it is located just four miles from the beach. Like The Links, it features scenic views of the Assawoman Bay, with rich forestry on some holes and marshlands on others.

Bill Hamilton, the director of golf for the Bayside and Bear Trap courses, boasts this course is as difficult as any course in the area.

“The slopes are way up there, meaning it is a truly competitive course. It’s as tough as any golf course in the Ocean City market or in Delaware,” he said. “It ranks as one of the — if not the — hardest courses around.”

Some courses in resort areas may incorporate the beach into their designs. Not at Bayside.

This course was intended to represent a more traditional-style design, with elevated greens and pot-style bunkers.

“If you miss the green at Bayside, you have got to have some ability to hit a shot up onto the green,” Hamilton said. “It’s pretty tough.”

Bear Trap has the appearance of an imposing course, but the most frequent reaction Hamilton hears from golfers is that it’s where they’ve scored their lowest rounds … ever.

“If you keep the ball in play, you’re OK. It sounds simple, but if you hit off (track), there are mounds out here,” Hamilton said. “That’s what the architect wanted. Not everybody hits it dead straight down the middle. If you start spraying the ball, it’ll get ugly.”

Bear Trap underwent some changes recently. The course has a new look now and mound conditions have been improved.

Thus far, feedback from golfers has been very positive, Hamilton said. Affelder has not played the course too much, but he did praise Bear Trap for its distinct trio of nines that test a golfer’s skills.

The course’s versatility and appeal to golfers of varying levels is what distinguishes it as one of the best courses in the state. And along with Bayside and Lighthouse Sound, some of the nation’s must-play stops.

“It’s a huge honor,” Ruark said. “If you take a look at that list, there’s a lot of huge names on there. And we’re ranked among the greatest courses in America.”